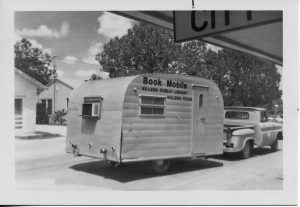 Thanks to the efforts of Florence resident, Eula Hunt Beck, the Florence Public Library opened in October 1974 in a mobile unit with 500 books on indefinite loan from the City of Killeen. The Library was incorporated as a department of the City of Florence on May 13, 1975. The City Council appointed a nine member advisory Board of Directors to supervise and maintain guidelines and administrative duties for the Library. Shortly thereafter, the library moved to the Atkinson Drug Store Building at the corner of Main and Storey Streets. In February 1983, the library found its permanent home at 207 East Main Street.